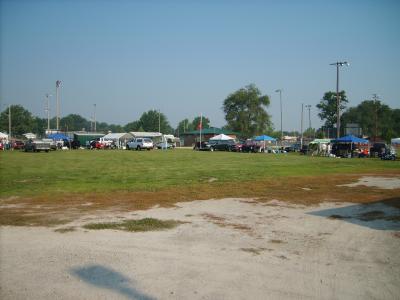 The Second Annual State Championship “Go Ahead, Make My Barbeque” contest will be held on June 20th and 21st, 2008 in Trenton, Missouri at the Rock Barn (North Central Missouri Fairgrounds – 1211 Oklahoma Avenue).

The contest will once again be held in conjunction with the Gooseberry Festival and other local events during the third weekend in June.

Contestants will be preparing Beef Brisket, Chicken, Pork Ribs, Pork, and an unnamed category at this time.

The entry fee is $125.00 for the event which covers all five categories.

The contest is sanctioned by The Kansas City Barbeque Society and will follow KCBS rules and regulations.

Copies of the rules and regulations are available upon request.

Please contact Les Spickard or Rex Ross for any additional information or for an entry form.

The prizes will be announced after all donations and sponsorships are received.

Join in and write your own page! It's easy to do. How? Simply click here to return to BBQ Festivals and Competitions.